What do automakers really know about IoT security? The Ponemon Institute, an independent researcher on privacy, data protection and information security policy, has produced a survey, in conjunction with RogueWave and Security Innovation, on car cyber security, with contributions from over 500 automotive developers, engineers and executives, primarily from automotive OEMs and Tier One suppliers.

Recent statistics about automobile safety are disconcerting, both for the automotive supply chain and for the consumer. Media attention has highlighted numerous security and safety issues for the connected car. However, as sensational as some of these headlines are, the problem is real. Nobody wants to stifle innovation, much less slow the consumer’s access to the benefits of innovation, but this new technology is moving faster than the government’s ability to regulate its use.

We are now at a tipping point. Innovation no longer starts and ends with a car’s mechanical components - electronic components now make up over 50% of the total manufacturing cost of a car with some cars now containing over 100 million lines of code. This clearly represents a source of worrisome security vulnerabilities.

Estimates are that 60-70% of vehicle recalls are due to software glitches. Cars are run by networks of computers, wireless connections and electronic control units (ECUs), offering the potential for hackers to access critical car controls including the steering and braking. Modern cars can easily connect to smart devices and the internet. This connectivity potentially exposes critical systems to hackers which could lead to remote attacks on cruise control mechanisms, braking systems and other safety critical operations.

It’s not just new cars that should be considered vulnerable to hackers. Older cars are increasingly connected using devices that are plugged into vehicle diagnostic ports and linked to smartphones. Once a smartphone is connected to the car’s network, both the automobile’s fundamental safety and the driver’s personal information can be compromised. Knowing this, it’s obvious that security and safety should be front and centre in automotive software development.

Are automakers worried about hackers?

Despite the public statements that hackers aren’t wasting their time on cars, and that the fear of a car being hacked is simply unfounded, 44% of the developers surveyed believe that hackers are actively targeting automobiles. This could be a positive sign, demonstrating that developers are at least aware of the security and safety vulnerabilities that their code could present, even if the possibility is remote. However, there are plenty of examples of hackers attacking cars directly, so in reality the possibility is not remote. In Montreal, hackers were able to enter cars leaving no visible signs of forced entry, and in California, thieves could buy a $30.00 kit which allowed them to access many high end vehicles.

Is security a priority?

Despite the understanding that automobiles are hacking targets, only 41% of developers polled agree (and 28% disagree) that secure software is a priority for their company. Worse, a large number of them (69%) believe that securing the applications is difficult and nearly half (48%) believe that a major overhaul of the car’s architecture is required to make it more secure. Only 19% think that it is even possible to make a car “nearly hack-proof”. 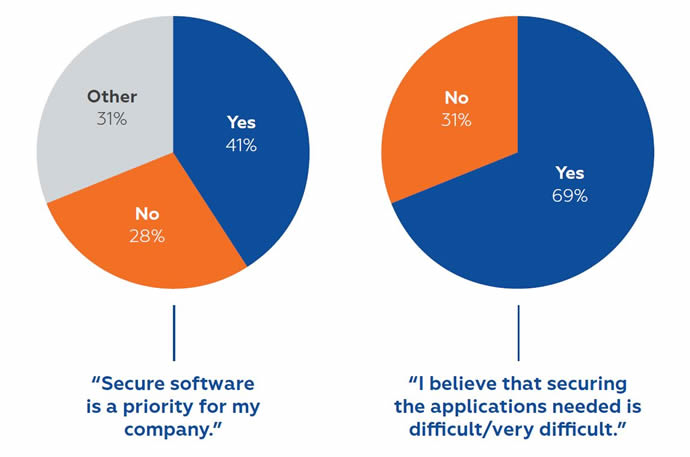 Why isn’t security a priority?

Based on the survey, there is a belief that even if cars are being targeted by hackers it is difficult to stop them, even if their company did place a higher priority on security. This begs the question - why are companies not putting more emphasis on security in their applications? The main reasons they cite are pressure to complete development (24%), security takes too much time (22%) and it’s not considered important (22%). These reasons for ignoring secure development practices would indicate that it is imperative that companies formalise security throughout their development lifecycle processes. In fact, over half of the respondents felt that security is not integrated into the development process, but that it is treated as an add-on responsibility, usually managed by someone else.

It is clear that individual developers are not aware of their own responsibility, and that a knowledge of security and their role in addressing it should be built into the fibre of the company. This would make security not a nice to have, but a must have. If security is not optional, it is less likely a company will end up in the headlines for all the wrong reasons. Developers must treat security as a design imperative in the same way that they treat quality, functionality and performance requirements. 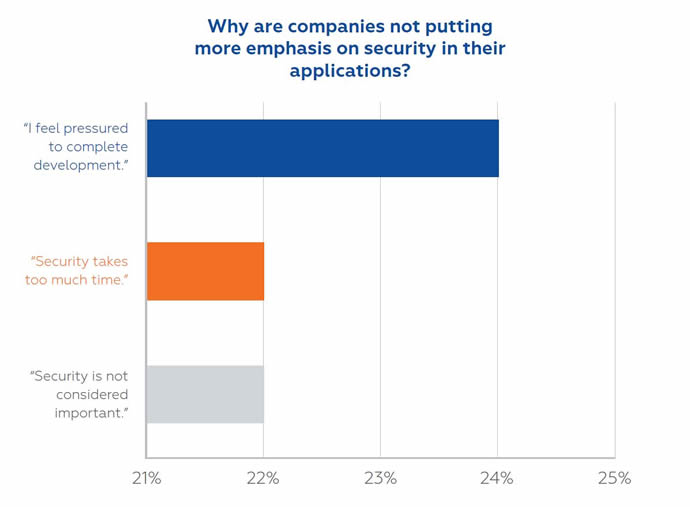 What are the barriers to making security a priority?

Identifying the barriers to achieving security is paramount. To some extent, those on the automotive supply chain have not considered themselves “in the software business” until recently, when well publicised hacks and threats began flooding the media. For this reason, only 28% of those polled believe that automakers are as knowledgeable about secure software development as are other industries. So not only is basic knowledge a barrier, but there is also insufficient training. Less than half of the respondents believe they are adequately trained in secure architecture and coding practices. The good news is they acknowledge the gaps - but it’s the responsibility of companies to bridge those gaps in order to avoid life threatening security failures.

However, how can we bridge this gap when 47% don’t believe that making an automobile “nearly hack-proof” is even possible? This re-enforces the need for companies to accelerate secure development training and create awareness across their organisation. Building secure code is possible, given the right processes, tools and policies.

What are companies currently doing?

Despite what we’ve learned about basic coding practices in regards to security, it is important to recognise that, based on the research, companies are not simply sitting back and ignoring the problem. The lack of knowledge on how to move forward doesn’t mean that automakers aren’t doing anything to secure their applications. Nearly two-thirds (63%) are running automated software scans during development, half are running scans after the application has been released, and slightly more than a third (36%) are conducting penetration tests.

However, only a quarter of those surveyed say they are adhering to secure coding standards or conducting high level assessments, such as threat models. They also realise that a change in their software development processes as well as specially trained staff will be required to improve security in automobiles. The key will be for the companies to begin operating and behaving like software companies, using the proven and tested methods of others to avoid recreating the wheel, but at the same time making a major shift in their standard operating procedures.

Learning from other industries

Only 28% of automakers believe that they are as knowledgeable as other industries with respect to security, but they don’t appear to be serious about understanding and adapting best practices from other industries.

The IT world has been struggling with cyber security for well over a decade, with varying levels of success, but they have paved the way. The automotive industry does have precedents to lean on rather than re-inventing secure development techniques, should they choose to use the lessons learned from their peers in other industries. The inherent challenge to this IoT problem is, how do manufacturers ensure that the software, deeply embedded and intertwined with their hardware, is secure, even when there are countless potential consumer environments that their product could end up in?

Clearly, the software development processes of old (one-to-one testing systematically), are not feasible, whether you’re talking about mobile phones or the connected car of today. The amount of testing that would need to take place, when taking every operating system and hardware possibility into consideration, would be virtually impossible.

Best practice is for companies to provide their engineers with processes and tools that address security throughout the software development lifecycle, mitigating security risks up front, well before code is deployed. Benefits are not limited to security improvement though - they extended to speedier development processes and simplified adherence to industry and government imposed standards. The automotive industry is at the right juncture now to take a page from those that have gone before them, to begin standardising processes and procedures to ensure more secure code development.

It is important to identify the gaps in an organisation so management and individual developers can address the vulnerabilities that lead to security breaches. What the Ponemon survey indicates is a basic lack of understanding of how to secure code – not whether they should or not. There are some basic misunderstandings about how simple process and policy changes can make a big difference. For instance, 18% of respondents indicated that their biggest concern was non-compliance with industry standards, though the majority of those same respondents said they were very worried about vulnerability to hackers and safety of the vehicles they were helping build. This is interesting, since industry standards are inherently designed to mitigate those issues. It would be reasonable to say that management should be providing development tools that build standards checking into their processes. Using the latest tools available means that developers spend less time staying up to speed with standards, and provides management with the peace of mind that security is simply built-in. 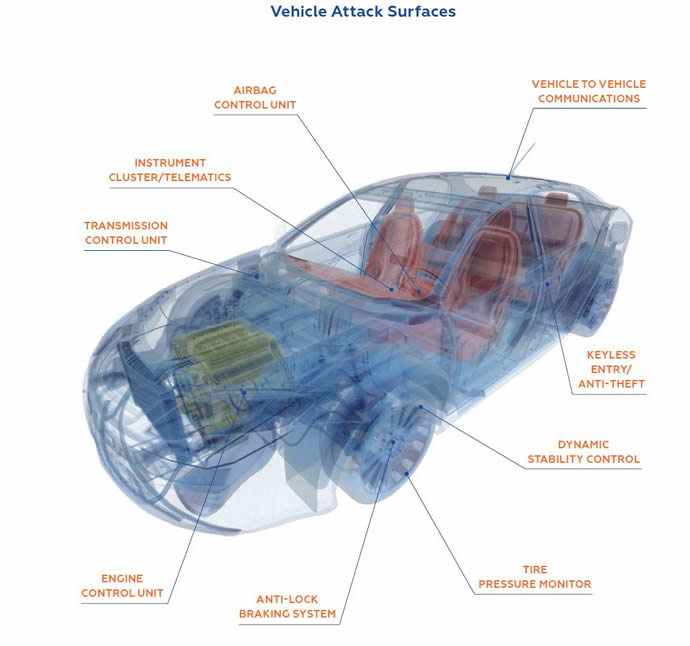 Fundamentally, companies should be making it easier for developers to create secure code. Companies need their developers to focus on innovation, and not tedious processes for ensuring security. Providing processes, policies and tools makes security non-negotiable, and more than an afterthought. Security should be infused in every step of the SDLC, but only 45% of developers indicate that their development processes include any activity that supports security requirements.

How can we expect individual contributors to take responsibility for a moving target, or a target that is not even identified? In fact, the majority of the survey’s respondents believed the CIO was the person most responsible for security in their organisation – but that role rarely, if ever, even touches the code. When asked to select what one thing they thought should be implemented to make automobiles more secure, developers chose in equal measure, change in software development processes and specially trained staff.

Connecting cars to the internet brings a host of new convenience, entertainment and safety features to consumers, but this connectivity also opens up cars to remote hackers. Automakers and their suppliers are struggling to adapt their hardware and software architectures, their code and their processes to deal with this new threat to automobiles. Contrary to public statements by the automakers, the Ponemon survey shows that OEMs and their suppliers do not yet have the desire, skills, tools or processes to make a secure car.