The electric vehicle trend is self-explanatory, with several countries and manufacturers looking to adopt electric and hybrid drive technologies for future car propulsion. Volvo for example has announced that it is switching from 100% reliance upon the internal combustion engine to electric based propulsion.

The recently completed London Taxi Company factory will be producing electric taxis, supported by a government funded network of charging points. In Europe, France has announced it wants all cars sold after 2040 to be electric.

The UK government has recognised the opportunity and the need to develop indigenous capabilities to manufacture the critical battery assembly technologies on which electric vehicles depend. In July, it announced a significant investment programme to develop the battery technology that will enable more energy storage and support a low-carbon industrial economy. With regard to electric vehicles, a project to demonstrate that commercial production of batteries for electric vehicles is both feasible and cost competitive is now under way. It is using Festo automation technology to achieve the levels of speed and accuracy required to pick, place and handle components.

Daniel Bolton, Technical Director at Horizon Instruments, explained: “We faced a number of technical and practical constraints when designing the battery module production line. These included a relatively confined space in which to fit the equipment and strict budget parameters, as well as a lead-in time of just seven months. We also needed to find a way of electrically testing each cell, rotating cells on demand and placing the cells into each module with high degrees of accuracy and at speed.”

Put to the test 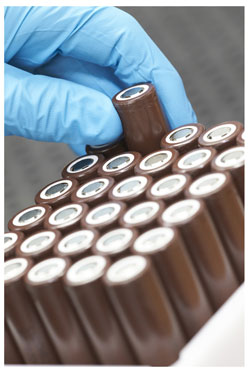 The pilot line required groups of 30 cells to be tested simultaneously for current and voltage before each cell was picked and placed in the battery modules. WMG had identified a standard battery testing unit as being fit for purpose, but unit costs and space constraints meant that it was not possible to accommodate 30 individual battery testers. To solve this problem Horizon and WMG developed a bespoke multiplexer interface which allowed a single battery tester to be used. This not only delivered savings on space and capital cost, but enabled data collation regarding test status.

The area available for battery assembly system is rectangular and measures approximately 1.2m by 2.0m. The system spans a through flow conveyor. Following testing, the battery cells need aligning accurately and sometimes inverting before being inserted into the module located on the conveyor. The number of battery cells required for a module varies and is configurable via a recipe. 100 individual cells per module is typical, with a total weight of approximately 9kg once assembled.

Again, space was at a premium. There was not sufficient room to employ a standard robotics solution, which would require a circular movement around the module in order to place all the components. Another novel solution was required.

Horizon considered a number of options to arrive at a bespoke design, but Festo automation won for several reasons. “We were confident in the quality of the technology, having worked with Festo on previous occasions,” said Bolton. “More importantly for this project, Festo were capable of delivering a total Cartesian robot solution; so we didn’t need to co-ordinate multiple suppliers or worry about product compatibility. They delivered a custom, cost-competitive system within eight weeks of the order being placed and also provided technical support throughout the design, installation and commissioning process.”

Festo automated solution
At the heart of the AMPLiFII battery pick and place system is the Festo EXCH 60 H-Handler, a highly dynamic 2D planar surface gantry, controlled by a Festo CPX valve terminal.

The EXCH is aimed at high-speed assembly operations where small, light mass-produced items need to be positioned quickly and flexibly. The gantry has a rectangular working area, which makes it more economical than Scara and delta kinematic robots: both in terms of mass – around 150kg – and space requirements. The EXCH has a standard XY axis, but its single belt enables precise positioning at high speeds within a compact envelope. It also features a connector so that Z axis equipment such as a gripper can be integrated into the handling system with ease.

Powered by two fixed motors, the EXCH H-Handler delivers an optimum dynamic response when compared with other Cartesian gantry systems. By eliminating the need to use separate gantries for each axis, the EXCH delivers very precise alignment. It operates at speeds of up to 5m/s and acceleration rates of up to 50m/s2, and is capable of 100 picks per minute with a repetition accuracy of +/- 0.1mm.

The CPX terminal used to control the cell picking activity is Festo’s flagship automation platform, allowing state of the art electronics and pneumatics to sit on a single, standalone base. With modules available for PLC control, multiple fieldbus standards, motion control, inputs and outputs, the CPX reduces the number of components on the machine whilst giving the controls engineer all the flexibility they could need.

This combination of control, speed and precision was critical to the success of the battery pack assembly line in demonstrating commercial viability. Using this combination of Festo automation technology means that each cell can be picked, rotated, aligned and placed in the modules within 1.2sec.

Steve Sands of Festo said: “This project is very significant for us because it is the first time our EXCH H-Handler has been applied in the UK. However, the automation technology now incorporated in this pilot line for electric vehicle batteries was originally developed for the construction of solar panels; so it has already proven its ability to handle delicate components and place them with great precision at speeds compatible with commercial production. This technology also has great potential to bring the benefits of automation to other industrial processes, such as high speed assembly, materials handling and palletising.” 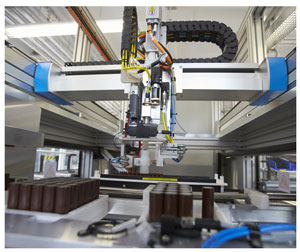 Charging ahead
In addition to the pick and place system, the pilot line includes a Bosch Rexroth conveyor system and a Siemens control system, as specified by WMG. Festo servo motors are also used to provide vertical movement, and the transportation system for the battery input trays relies on Festo actuators.

Commenting on the successful commissioning of the new automotive battery pack pilot line, Professor Robert Harrison of WMG said: “The UK government recognises that it is critical for the UK to embrace the opportunity created by the shift to electric vehicles.  This is a proof-of-process pilot-line that, via the high-speed cell picker and other stations, will allow us to demonstrate our ability to automate the cell-to-module packaging process and to help pave the way to upscale to a full production plant in the Midlands region.

AMPLiFII will develop the new knowledge, skills, technology and facilities to support UK industry as it seeks to use new technologies and processes in vehicle battery systems. The project will help develop the next generation of traction batteries for electric and hybrid vehicles. It will combine the best human and automated assembly methods to manufacture battery packs and lay the foundations of a new UK automotive supply chain based around automated technology.”