Feeling like a winner at this year’s Truckfest Northwest, Jannine Burt, Regional Fleet & Sales Manager for JOST UK saw her long-term client James Richardson, of Richardson Transport mark his return to the show ring with a three trophy win. It felt more of a triumph as fifth wheels don’t usually make it into the limelight, but this year was different.

James’s Volvo FH16-750 tag-axle tractor unit won second place as the ‘Best Kept Overall New Truck', came third in the ‘Best Kept Custom & Paintwork' category and was also presented with the Martin Rigby Memorial Award. This was his first competition for some time, as he has kept busy for the last several years building up his family business.

“JOST has been supporting the Richardson Transport fleet with fifth wheels, landing legs and other equipment for many years, and it has been great to follow how James took over the business from his father and is now bringing the next generation of his family into the business.”

First and foremost fifth wheels have to be reliable and safe. They also have to be easy to operate, so that coupling and uncoupling are efficiently completed. For this reason James consulted with Jost and decided that the best option would be to choose a JOST low maintenance air sliding fifth wheel for the new Volvo.

Richardson said: “We don’t just show the truck, it is a working vehicle too. It will be based at our depot in Newton-upon-Derwent, Yorkshire and will do at least 50,000km a year, mainly on one of our key contracts – delivering nearly a quarter of a million eggs at a time to a plant that makes influenza vaccine.” 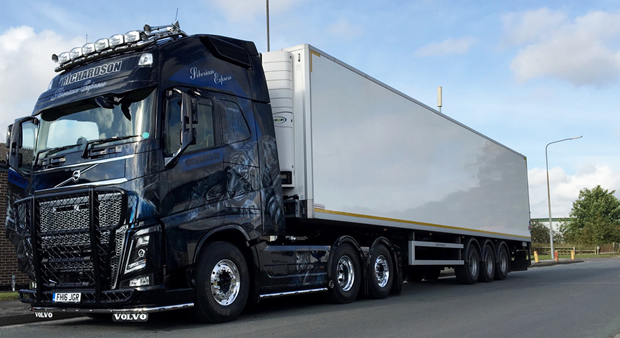 On each run the tractor will haul one of the company's four air-suspended refrigerated trailers. These are fitted with special internal air bags that inflate to secure trolleys carrying the eggs in place during transit.

He continued: "We have three vehicles dedicated to this job and they run seven days a week. Each load weighs 15 tonnes and as the eggs are collected from farms all over the UK, the trucks have to cope with both rough country tracks and long miles on the motorways. The fifth wheels are thus subject to flying muck, dirt and stones, hail, rain and snow, but with 15 years’ experience I have every faith in the JOST units.”

When it is not delivering eggs, the new ‘Siberian’ truck will be busy on other Richardson runs, including turf transportation and general haulage.

The Volvo has quickly become known as the Siberian because of the image of a tiger appearing to rip its way out of the rear of the cab. Creating the truck was a nine-month labour of love and required the skills of many people and organisations.

Burt summed up with: “James and so many other people have put their heart and soul into this truck – and have created a real showstopper. At JOST we take pride in knowing that our fifth wheel is working hard and helping this wonderful looking truck be a safe and viable fleet vehicle, as well as a showground stunner.”